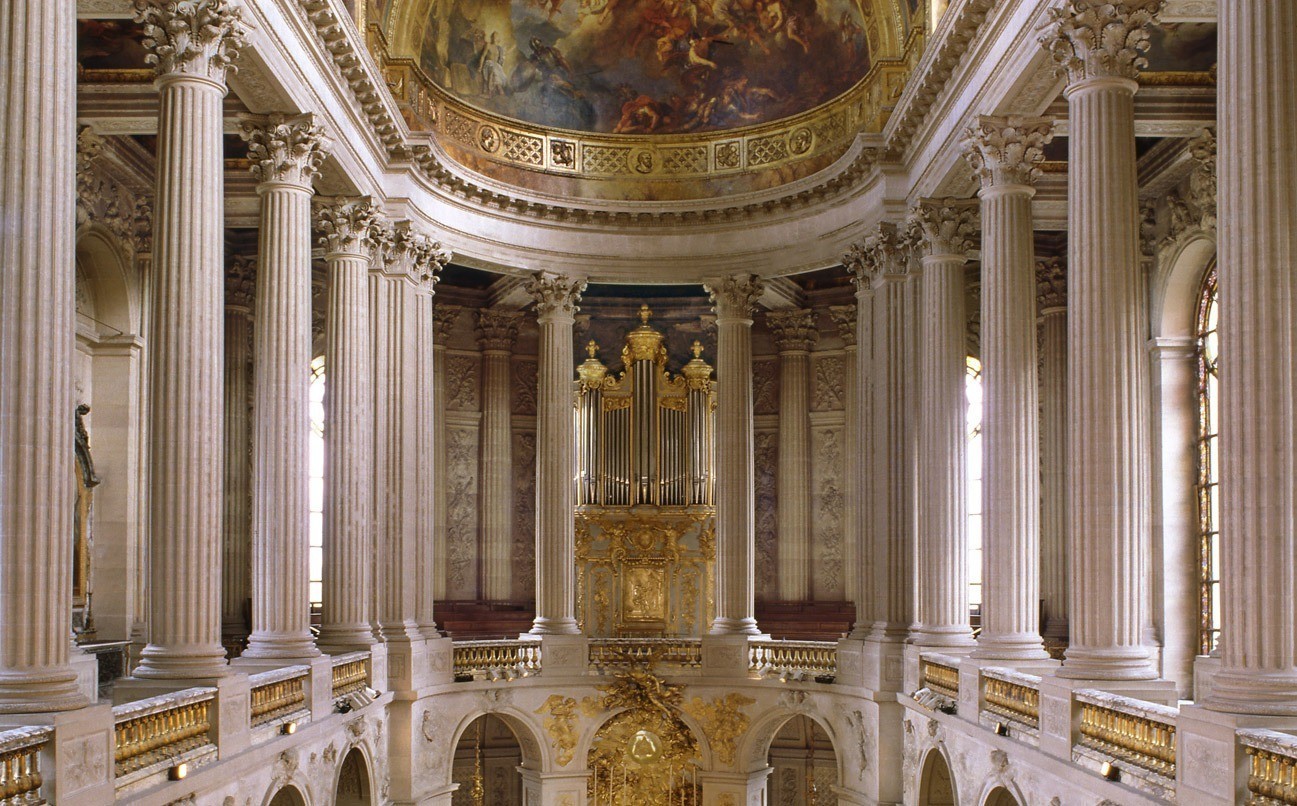 The history of the construction of the Royal Chapel of the Palace of Versailles is as eventful as the history of France itself. No less than four different projects were started, all unfinished, before finally the Chapel as we know it today was built. Meanwhile, the architect who had thought of the plans for this last work died and it is Louis XIV in person who oversaw the end of these titanic works. It is a building at the height of grandeur for the Sun King with huge columns decorated with arcades alongside magnificent sculptures and engravings.

But when you leave your apartment to see one of the most visited places in the Palace of Versailles, it will also be to appreciate the power of the paintings on the ceilings, a true French Sistine Chapel. Here the King wanted to show his full devotion and magnify the story of Christ. It is with difficulty that your eyes will finally move from this exaltation of religious painting to land on the bronze, marble and gilding pieces that make the room so unique.

The beauty is architectural, of course, but it is also musical. Indeed, for one of his biggest projects, the King decided to put music at the heart of the Royal Chapel. This resulted in the installation of a grandiose organ, designed by Clicquot, in the center of the building. The sound is breathtaking and the show unique, especially when you know that all the greatest organists in history have used this keyboard, including François Couperin.

The Royal Chapel of Versailles is in fact the perfect balance between French architecture and the majestic luxury of royal construction. It was also, for Louis XIV, his last masterpiece and, so to speak, the last trace he left in history.

Les Demoiselles à Versailles is a family-owned Versailles brand at the origin of an innovative concept of short-term luxury accommodation (a few hours or several nights) for stays in a high-end property where you will feel at home with personalized concierge services and VIP access to prestigious brands.

Les Demoiselles à Versailles name is a homage to the daughters of the founders, Diane and Victoria, born in Versailles, and conveys an image of luxury by offering themed stays in exceptional accommodation carefully selected by Katia Lobato, the founder, that reflect the values ​​and personality of the brand.

The concept was launched in her personal apartment, located 50 meters from the Palace of Versailles, combining traditional Versailles, the famous “French touch” and embodying French luxury.

This concept highlights French art de vivre, a common thread that can be found in all the properties managed by Les Demoiselles à Versailles.

Moving beyond Versailles, new properties have recently launched on the Basque coast with Villa Bakéa and in Turkey with Villa Caprice in Cappadocce.

Concierge services are dedicated to both clients and owners of exceptional places wishing to discover or convey the values ​​of French art de vivre.

A taste for beautiful things, and her expertise in seasonal rentals as owner of the apartment right next to the palace of Versailles, led to Katia Lobato being consulted for coaching in seasonal rentals management and launching seasonal rental projects to move them up market to the luxury sector, both in France and abroad.

Owners or investors are supported in their desire to create something special from scratch or to take their current property dedicated to short-term rental to new heights.

Her legal profile means that she can protect both clients and owners and advise them on the legal issues of seasonal rentals.

Staying in a property or entrusting your exceptional house to Les Demoiselles à Versailles means adhering to a philosophy and living and sharing the exceptional.